Gone but not forgotten..

I’ve promised I would blog on some of the good guys I’ve met too, and just hadn’t done it. Now, I’m correcting that oversight.
Dave Harris, one of the great but mostly unknown of martial artists I know, died on September 9, 2008. Dave was a great influence on my attitude towards learning and along with several others, pushed and coaxed the stubborn punk attitude kid who is now writing this to look beyond the obvious. That was over 20 years ago.

Though I didn’t have a lot of time with Dave, and didn’t get the approach he used to teach for a long time, at least not enough to apply it to myself, I did finally start to get it and it changed how I learn. Dave was very much more of an influence on me than I realized. It’s only now when I sat down and think about it after his death, that I see how much it tied to what others, such as Bernie Lau and Don Angier taught me, only from Dave’s own perspective and play oriented approach.
Dave’s approach echoed that of my teachers, but Dave’s presentation didn’t get through my thick skull until much later. He was always so loose and ready with a joke, I missed far more than I absorbed. In those days, I needed someone to push and bully me a bit, and I regret I didn’t get more time with Dave and was too immature to absorb much back then. This is one of my favorite pictures of Dave, the casual dress and low key appearance hid a brilliant mind, talents, and remarkable skill.
Dave was a good but hard man to know. But for those students who put in the time and work with Dave, he was as Andy Dale called him, "Dumbledore". He was truly a master who delighted in learning and sharing his craft.
At Dave’s informal memorial, students and colleagues from his martial arts classes and his classes as a College teacher in art and ceramics, gathered to share their stories and memories. Students from 20 to 30 years ago came in on short notice including from Hawaii. All had roughly the same experience with Dave as I did. Being made to feel like a complete dork, only to have Dave’s good humored and open attitude bring your curiosity out and overcome any embarrassment at being trashed so effortlessly.
Dave was very much an inquisitive mind, he was forever looking for new ways to absorb and to teach. He was a very strong behind the scene influence on numerous students in the Pacific NW. That I believe, is the job of a good teacher, to give the student the basics needed to grow and learn on their own. But all too often, the student remains oblivious to the depth of impact of the teacher upon them until later. Dave, we will all miss you.
Another friend with over 40 years in judo, Mark Feigenbaum, passed away last spring, but I hadn’t heard from him since just before he passed and his family would not have known to contact any of his friends across the country. He had lost his eyesight, had a few other health problems rising, and didn’t respond to calls. He had indicated he was somewhat embarrassed by his condition, and I thought he was just choosing to stay low and out of sight. We had gone for long periods with out contact before, but this time felt different. I discovered his cell phone was no longer in service, and trying to find a new contact number for him, I found instead his obituary.
I had gone through his mother’s illness and death with him a few years ago. In email and phone calls, he shared much of what he considered important, his concern for his mother, his love of music of all kinds, playing the trumpet, his pets and animals of any sort, martial arts, but in particular Judo. Mark taught kids for years in community centers and YMCA for nothing but the joy of sharing his judo and learning more about his chosen art. In March 2008, about a month before his death, Mark told me about his contact with a judoka at the London Budokwai and was very enthused about learning more about the Go no kata and the Nage Ura no Kata.
There is a great article on judo as Mark experienced it in his early years in the November 2000 EJMAS Journal of Combative Sport. http://ejmas.com/jcs/jcsframe.htm I had sent him a picture of my wife, Amy, my dog Mochi, and I to him last year. He told me it was on his computer as wallpaper and on his wall. He said, Amy looks fantastic, Mochi’s a real looker, and your hairline is receding." Later, in another email towards the end of his life, he said about the picture "I can’t see it clearly, but I like knowing my friends are smiling at me."
The last thing he sent me was a large assortment of music he loved in his life and wanted to share it with me. Now I understand why he sent it, it was his way of saying this was important to me, and I want to share it with you, and maybe that was as close as he could come to saying goodbye outright. 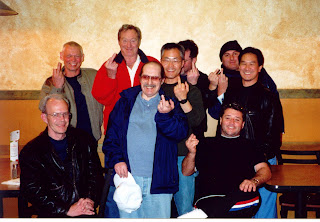 I was going to post a good picture of Mark, but don't really have any. Instead, I'm posting a picture of the fun Mark, it's quite appropriate, a bunch of grown men acting like kids. That's Mark in the front, with the glasses and white cap. Hey Tomato, (as he called himself) Save some of that bottle of Scotch for me and the guys. We will see you before too long.
Jerry Dalien was a strange guy. But, one of the strange guys there should be more of. An old time judoka student of Iwakiri Sensei, Jerry was a big man, and by the time I met him, ill with complications from diabetes. That didn’t stop him from getting on the mat and still doing some pretty damn impressive judo, despite his legs not always working well. I don't have any pictures of Jerry, sorry.
When he passed in late 2001 over 400 people from across the country turned up for his funeral service. Joe Svinth and I went to his service. We listened to stories about Jerry helping out his students with cash and his personal credit cards to help pay moving expenses or to get through tough times. Numerous adults who studied with Jerry as children over 30 years ago, made the trip across the country just to say their farewells. My favorite was Jerry trying to reenlist in the army following 9/11 and his disappointment at the Army not being able to find use for a 60+ year old man in a wheelchair with advanced diabetes.
As we sat there, Joe leaned over to me and said as close as I can remember: "I don’t even know 400 people. And I know you don’t know 400 people who would cross the street to spit on you much less come from across the country to your funeral to say nice things." And then Joe laughed. But it was true. Think about that, a man who was such a positive impact on so many people, they pack up their family to fly across the country just to say goodbye to a man they hadn’t seen in 20 to 30 years. The same thing happened with old students at Dave Harris’s memorial.
I include that bit above because it’s a nice addition to the next bit on Dalien. In an article on Pacific NW Judo history Joe wrote, he included comments from Iwakiri Ryoichi Sensei, made to Jerry Dalien just prior to Iwakiri’s death.
"Jigoro Kano told me once that I must be strong in mind and body always, and help others in life. I appreciate all you peoples who come and see me. I am old now and peoples have no time for them. Mr. Yamashita, Mr. Bush, Mr. Demorest, and you Mr. Dalien are fine students of Kano’s judo. Mr. Uchida, he is important man in Judo – you tell him good-bye for me. I am not important persons, I have done nothing great, I have no schooling. You please make any honor for me, just judo. Okay? I do not have long time left to live anymore, but want you to keep my judo, please? Okay? "
I think Jerry, Mark and Dave tried to live up to the sentiment of this comment from Iwakiri. Mark was always helpful to people, on and off the mat, and he taught judo as a passion in his life. Jerry did too. Dave was always helpful and cheerful to his students, even when his own life was harsh., He had retired to care for his wife Geri, who had developed Alzheimer disease. Yet one would never know from his conduct he was hurting inside since he and was always ready with a joke and smile and to share what he knew.
When I was dumped on by Bernie to take over Icho Ryu, one of my influences was Fujiko Tamura Gardner, who is the sister of Vince and Mas Tamura, also students of Iwakiri Sensei. Small world, but as I’ve been told, "good people attract good people and foster that behavior."
I don’t know that I do that so well, but one of the things I tell students is "Work to be good at your martial art. Failing that, work to be known as a bunch of good guys to train with and hang out with." Excuse the bad English and grammar. That’s about as good a legacy as anyone can ask in budo in my opinion.
I doubt I’ll ever be as well regarded as these men, (I’m far too antisocial and grumpy) but I’ll try to instill some of the attitude of Dave, Mark, and Jerry in my teachings and hope it sticks.
Posted by The Fluffy Aiki Bunny at Monday, September 22, 2008 No comments: 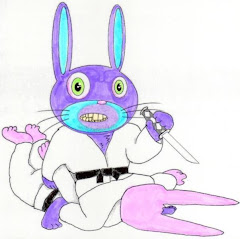